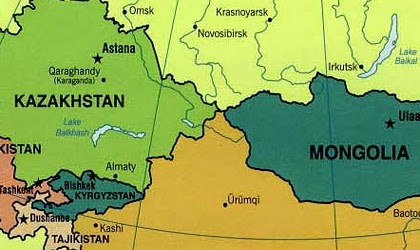 Central Mongolia is where Tim began his 6000-mile westward horseback journey across the steppe to the Danube. With both Russia to the north and the Chinese "autonomous" province of Xinjiang to the south closed to a foreigner in 2004, he continued into giant Kazakhstan, the second-largest of the former Soviet republics (after Russia). There he met Bakhetbek, a Kazakh born near the Xinjiang capital of Urumqi who had fled back to ancestral Kazakhstan because of anti-Kazakh violence (the murder of his brothers) tolerated, if not actually encouraged, by the Chinese regime. Bakhetbek's wife reveals to Tim that her husband learned only a year before that he still had a niece alive and living in Urumqi.

Basically, I was drawn to Tim Cope's On the Trail of Genghis Khan -- the story of his 6000-mile horseback odyssey from Mongolia to the Danube, begun in the fall of 2004 when the Australian adventurer was several months shy of his 26th birthday -- because I thought it might plug a geographical gap in my mental geography, the vast Eurasian steppe sprawling more or less between Siberia to the north and the rest of central and southern Asia to the south.

Oh, I had no expectation of the book making me an expert on the subject, just giving me, well, something to occupy that space a little more specific than sheer blankness. In other words, the sort of thing that Ian Frazier's Travels in Siberia for the gaping expanse of taiga (that is taiga, right? of course giving way to tundra farther north -- I have a sort of general notion about the geographical entities steppe, taiga, and tundra, but they're not exactly crystal clear in my head) to the north). It gave me some places and people to fill in what had been not much more than a map blur with a sprinkling of familiar place names. 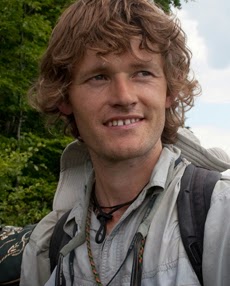 To be sure, I'm learning (and probably soon forgetting) a lot about the many ethnic groups -- starting with the Mongols to the east -- who over the millennia have practiced the nomadic way of living across the enormous expanse of the once-largely-borderless steppe. Tim himself was fascinated, or more likely obsessed, by the nomadic way of living, built around herding animals over these inhospitable lands, living a pack-up-and-go life based on horse transport. (It was, after all, in what is now northern Kazakhstan that men are thought to have first domesticated horses, somewhere between 3700 and 3100 BC.) But, not surprisingly, the journey -- and therefore the book -- engages Tim on a host of levels.

I came to this anecdote I have to share. It comes in the second leg of Tim's trip, in today's Kazakhstan. In Mongolia Tim had had the company of a girlfriend, Kathrin, but according to plan she then headed back to Germanys to take up a new job, leaving Tim to travel alone -- or, early on, in the company of a guide. At this point, he's traveling with Aset, a Kazakh villager, and a puppy belonging to Aset's young cerebral-palsy-afflicted son which Aset has insisted on bringing along. (When they part, Aset insisst that Tim take Tigon with him for companionship.) In terrible weather they have been given shelter by Bakhetbek, a 50-something Kazakh householder who promptly passes a test of Aset's (p. 129)


Aset pulled me aside. "Trust him and watch carefully -- a sign of a Kazakh host who respects his guests is that he will feed the guest's dog before his own."

True to Aset's words, Bakhetbek fed our ribs-on-legs dog a pot of lamb innards and stale bread, sinking his boots into his own dogs when they tried to join in.

The next day Tim wakes up to find that they're snowbound. "What I had assumed to be bright sunshine through the small window of our window was the glare of a snowdrift creeping up the windows." Which gives him a chance to get to know the family better. From pp. 131-32:


Bakhetbek had been born near Urumqi in China's Xinjiang province, and fled to Kazakhstan after his brothers were murdered in the 1960s. Later, his nephews, who remained behind, were also murdered. At his wife's gentle prod, Bakhetbek began telling his story himself, hesitantly, but was swiftly overcome with emotion.

"They killed us simply because we are Kazkahs," he said. "Back then, and even now, Chinese authorities don't protect Kazakhs. Actually, it was probably the police who did the murdering."

There was a bitter irony in Bakhetbek's return to Kazakhstan that he was well aware of. His own grandparents had originally fled to China among two hundred thousand others when the Russian imperial army violently quashed the 1916 Kazakh uprising. At the same time, though, Bakhetbek acknowledged that the tragedy of his family had been the experience of his ancestors through the ages -- whenever the Kazakhs found themselves under oppression or attack, they would historically flee to Chinese Turkmenistan, Sibera, and other parts of Central Asia, only to find themselves under another oppressive regime. 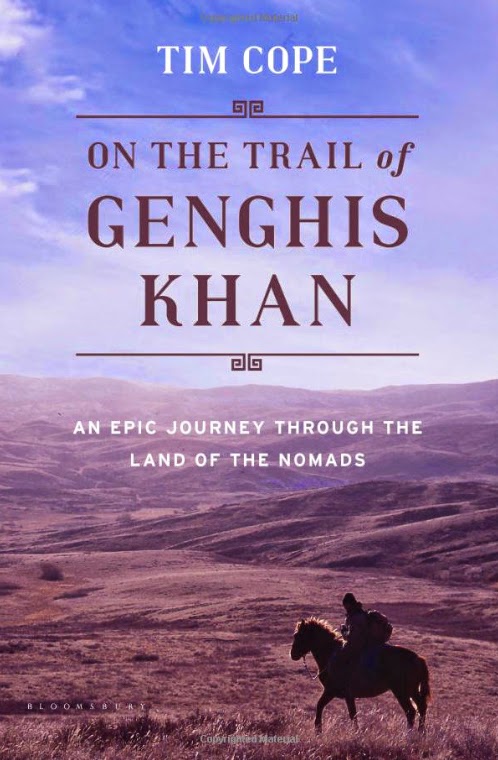 After telling his story, Bakhetbek looked spent, but there was a sparkle in his wife's eye. "Actually . . ." She looked over at her husband. "We still have one relative alive in China. She is Bakhetbek's niece, and she is studying in Urumqi. She wrote to us one year ago, but we have never met. She gave us a phone number, but we have never been able to call."

It was dark by the time everyone assembled outside in winter coats and fur hats. I pointed the satellite phone aerial to the sky and experimented with a few prefixes until the call went through. A woman answered. After a brief initial silence, all of Bakhetbek's family members took turns talking, struggling to hold back tears but smiling.

The occasion called for a feast, and after the phone calls it was all hands on deck. Bakehtbek's brother, who due to his bald head was nicknamed "the Kazakh Gorbachev," raced to get a sheep. In an outbuilding the men gathered with cupped hands to say a prayer before its throat was cut. Had I been of the Muslim faith, I would have been asked to bless the sheep, since traditionally guests were required to ask permission from the animal's spirit to partake of its flesh.

Late into the night we sat around gorging on meat and being plied with vodka. A dombra, the traditional two-stringed mandolin of the Kazakhs, was passed around. When Bakhetbek played there was a fire in his eyes, and he sat with his back even straighter and prouder than usual. Strong fingers moved instinctively up and down the instrument's neck. In Kazakh they say a good player can make the dombra sing. I was sure I could hear the beating hooves of horses. It was as if a stoic, unfaltering rhythm prevailed through the harsh realities of life and the land. I looked across to Aset, who was welling up with pride. The last beat ended, and Bakhetbek looked at me. His eyes arched into crescents; from the tears spread into the many channels of his weathered face and disappeared.

Kazakhs believe that when a guest walks through the front door, luck flies in through the window. It is a good omen: the sheep will give birth to twin lambs in the spring. Looking back on this occasion, the magic of this belief was embodied by my meeting with Bakhetbek.