Urban Gadabout: Is this or is this not a gorgeous photo? Take a gander at Mitch Waxman's beloved Astoria at twilight 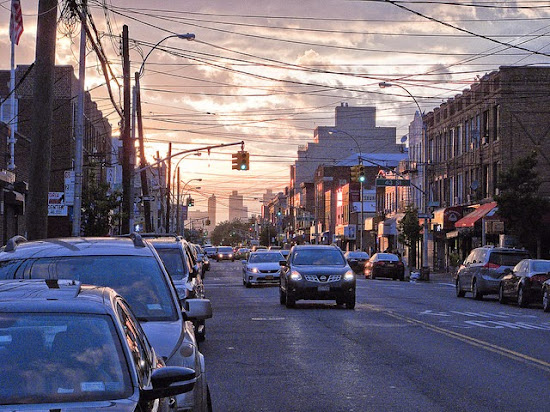 You can click on the photo to enlarge it, but better still is to look at it a photographer Mitch Waxman's intended size and resolution on his Newtown Pentacle blog.

I've written before about my happy tramping around NYC with Mitch Waxman (like this June 2012 piece about a visit to the Dutch Kills tributary of Newtown Creek, at just the time when Mitch was the subject of a big feature piece in the New York Times, "Your Guide to a Tour of Decay," including video). I've done walks with Mitch from Staten Island to the urban wilds of the basic surrounding Newtown Creek (Mitch is the official historian for the Newtown Creek Alliance), and just recently had the pleasure of rejoining Mitch and his frequent tour colleague Mai Whitman (whose tireless blogs for the Working Harbor Committee blog we frequently eavesdrop on here) for another walk to what is now known as the Plank Road clean-up site on Newtown Creek's eastern reaches, in Maspeth, Queen. (When we got to the site, I realized I'd already been there, on an earlier, more extensive walk with Mitch -- and Mai.)

One thing you learn quickly when you walk with Mitch is that he's never without his trusty camera. In a former life he was, as he describes it, "a comic-book guy," and that visual sense seems to have heightened as he's taken to walking the city -- especially parts of it that not a lot of photographers frequent. The result is an amazing quantity of amazing pictures, like the, well, amazing Astoria-at-twilight photo I've poached above. (Again, do check it out in Mitch's own posting.) I should note that this gorgeous photo accompanies a blogpost in which Mitch laments the fatiguingly high background-noise level in "my beloved Astoria.")

One happy result of reconnecting with Mitch (for ages now when I've known about an upcoming walk he was doing, I always had schedule conflicts) was a reminder about The Newtown Pentacle, which among other things is a great place to start to see some of Mitch's pictures. (It's also the best place to get current information about his tour plans with the various organizations he works with.) One photo that really caught my eye, even before I had any idea what indeed makes it so unusual among Mitch's pictures, was this one (click to enlarge): 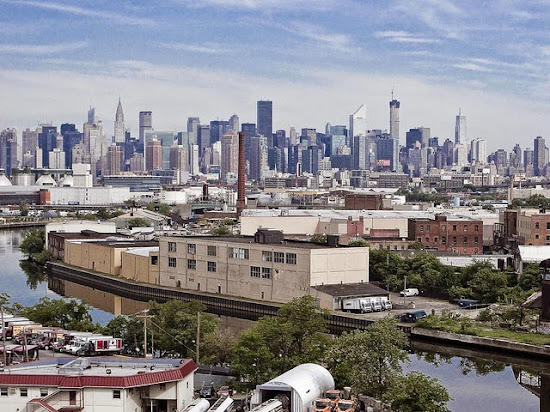 It turns out that this was indeed a rare vantage point for Mitch -- it was taken while riding in a car over "the high flying Kosciuszko Bridge" over Newtown Creek. As he explains in this post (and again, you should really look at the version of the photo there):


Not once, but twice, have I been invited to ride along with people in their automobiles in the last week. Motor coaches were once a significant part of a humble narrators life, when jaunts and journeys would carry one across the megalopolis, but my current incarnation is that of the pedestrian so when an opportunity to hurtle along in a steel motor box comes along – I take it. Of course, that doesn’t stop me from waving the camera around. Pictured above, the Penny Bridge section of my beloved Newtown Creek as witnessed from the high flying Kosciuszko Bridge captured while traveling at about 30 mph.

For reference, here's a pair of shots of Mitch's of the Kosciuszko Bridge itself, taken from opposite directions (again, click to enlarge): 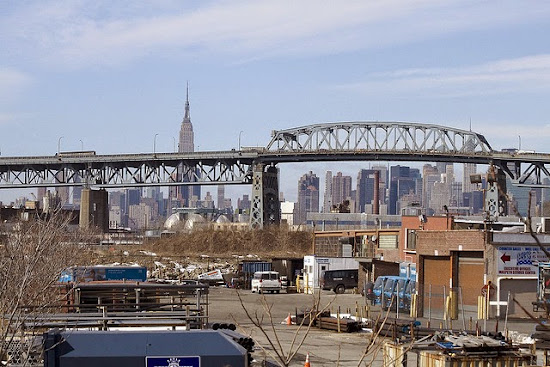 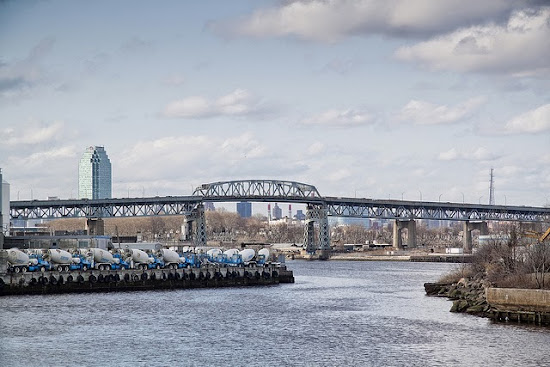 These photos were included in a Newtown Pentacle post from April 11, 2011, "Happy Birthday, Kosciuszko Bridge," in which Mitch offered "a virtual guarantee" --


that this is the only posting you will see today commemorating and wishing the Kosciuszko Bridge a happy 72nd birthday. Some 26,298 days ago, Robert Moses saw the first link in a crazy idea of his which would one day be called the “Brooklyn Queens Connecting Highway” open for business.

The Meeker Avenue Bridge opened on August 23rd, 1939 (renamed in 1940 as the Kosciuszko Bridge) –- some 631, 152 hours ago. It was promised to allow easy egress to the World’s Fair, and was a showpiece project for the Great Builder.

This poor bridge has taken varous sorts of poundings, not least from its heavy daily traffic volume, and is now scheduled for replacement, known the the NYS Dept. of Transportation as the Kosciuszko Bridge Project, which at $550 is described by the NYSDOT as "the largest single contract NYSDOT has ever undertaken."