Urban Gadabout: Summer gadding around the outer boroughs of NYC, with news from MAS, Jack Eichenbaum, and the NY Transit Museum 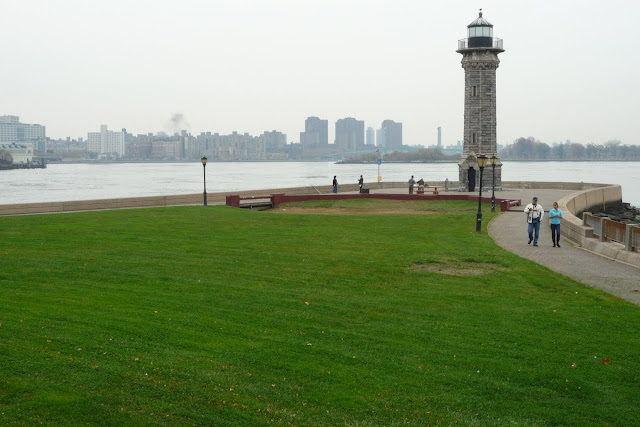 Lighthouse Park at the northern tip of Roosevelt Island -- we'll be there tomorrow evening for the Municipal Art Society's walking tour, Roosevelt Island: The Northern Route.

I haven't been writing much about my late-spring and summer wanderings, but after my enforced decommissioning in late April and May, I've been getting my rhythm back, and having some especially good times outside Manhattan. In fact, including tomorrow night's Roosevelt Island: The Northern Route (7/26, 6pm -- an evening tour, note), with Roosevelt Island Historical Society president Judith Berdy (who a few weeks ago led us on a terrific walk through the "Southern Route," down to the new Four Freedoms Memorial at the island's southern tip), I'll have had something like nine consecutive excursions over seven weeks outside Manhattan, including neat destinations like City Island, the tiny island off the coast of the northeasternmost Bronx, and the Little Italy along the Bronx's Arthur Avenue, both Municipal Art Society tours.

I actually undertook a walk less than four weeks after total-knee-replacement surgery, because I'd been wanting to do Joe Svehlak's tour of the few remains of Manhattan's once-thriving Lower West Side, a neighborhood that was basically to make way first for the Manhattan end of the Brooklyn-Battery Tunnel and then the World Trade Center. I've done a lot of tours with Joe, both his own and other tour leaders' -- and who should I run into on the Lower West Side tour but another of my favorite tour leades, urban geographer Jack Eichenbaum?

There's exciting news from Jack, maybe the most exciting New York tour news of the summer, but we'll get to that. Meanwhile I'm delighted to see that Joe is repeating his tour of Brooklyn's Sunset Park: The Old Neighborhood (Saturday, 8/31, 10:30am), where he grew up and later became a first-time property owner. I'm a huge fan of Joe's neighborhood tours (I still kick myself for missing his walk through Brooklyn's Bushwick neighborhood but loved the follow-up tour of Ridgewood, straddling the Brooklyn-Queens border), which provide a great feel for the way geographical and historical factors have shaped development as well as a feel for the way area residents live their lives.

Joe pointed out, by the way, that in his time Sunset Park wasn't yet a neighborhood in its own right, but was "the Sunset Park area of Bay Ridge," which then covered the full four miles or so of Brooklyn's waterfront along New York's Upper Harbor, down to the Verrazano Narrows. And the day after Joe's Sunset Park tour, Melanie Macchio will be leading a walk in Bay Ridge: Brooklyn's Western Waterfront Neighborhood (Sunday, 9/1, 4pm) -- I can hardly wait for that one! (The Bay Ridge walk means I won't be able to do another of architectural historian Tony Robins's patented art deco-themed tours, Art Deco on Central Park West; Sunday, 9/1, 2pm.)

Even though I did it last summer, I'm tempted to redo Norman Oder's Atlantic Yards: Urban Debate, Arena Debut (Saturday, 8/3. 10am), now that the first-completed part of the massive Brooklyn development project, the Barclays Center arena, has been open for nearly a year and is in full swing. Of course, as Norman, who has been the blogger most assiduously tracking the fairly squalid (and often flatly illegal) history of the project, stressed last year, when the arena was just opening, we won't know how seriously it will impact the immediate and surrounding neigborhoods until the serious parts of the develoment, the money parts, the 16 planned towers, are built and functioning -- if they ever all are.

One of the more suspicious aspects of the development is the way the modest concessions to the community which probably made it possible to finally get the project going don't kick in until virtually all of the planned development is completed, which may never happen. There doesn't seem to be much question that there will be enough towers built to alter the lives of everyone living in the area now, but that by itself won't trigger the community concessions.

Last summer I loved Norman's Atlantic Yards walk and presentation, which really gave us an immersion in the welter of issues raised in and by the project. I was all the more impressed since my attention was serious compromised by clock-watching even as we were walking farther and farther in the wrong direction to help me make the rendezvous for Francis Morrone's walk through Red Hook, the low-lying area on the western Brooklyn shore that would soon be devastated by Superstorm Sandy.

As it happened, i didn't make the start of the walk, but did manage to catch up, as did my friend Laurence Frommer, who had also been on the Atlantic Yards walk and had separately made his frantic way from one tour to the other. Laurence is an MAS tour leader himself, and I've been on countless tours with him, both his own and other tour leaders'. Earlier this summer he did a series of Pride-themed LGBT walks. This weekend he continues his exploration of the city's new phenomenon of cultural districts with a walk through the South Bronx's Mott Haven Cultural Corridor (Sunday, 7/28, 2pm-5pm -- yes, it's three hours). Then next weekend he's doing a pair of tours, Off and Off-Off Broadway, Parts 1 and 2 (Saturday and Sunday, 8/3 and 4, 3:30pm each day).

Let's see, I still have a tour coming up with Harlem (and Uptown Trinity Church Cemetery) maven Eric K. Washington: namely, Manhattanville: Recalling a Neighborhood's Activist Heritage (Sunday, 8/11, 1pm). I've really wanted to do a tour of this West Harlem neighborhood with Eric, and last time had it sell out on me before I realized I hadn't registered! Eric is also doing a Harlem Week edition of his terrific Harlem Grab Bag walk (Saturday, 8/17, 11am).

I'm also signed up for Bedford Stuyvesant's Eastern District (Saturday, 8/24, 11am) with architecture bloggers Suzanne Spellen and Morgan Munsey, who I'm happy to see have become MAS mainstays specializing in the Bedford-Stuyvesant area (and related areas). The next day they're doing Stuyvesant Heights Expansion District (Sunday, 8/25, 11am).

Staten Island will be represented too, with a two-part investigation of the north shore led by lifelong Staten Islander Georgia Trivizas: Part 1, basically the St. George area (I thoroughly enjoyed an earlier version of this walk with Georgia), tomorrow (Saturday, 7/27, catching the 10:30 Staten Island Ferry from Manhattan); with Part 2, the northwestern shore around to Snug Harbor, to follow (Sunday, 8/18, also catching the 10:30 ferry).

As I've said, I've probably learned more about how the underlying geography has conditioned the development of New York City neighborhoods from Jack Eichenbaum, a geographer, than from anyone else. I've still got a summer tour with Jack coming up, and it should be fascinating: Willets Point (Saturday, 8/17, 4pm), "a sewerless hardscrabble area of auto junkyards and related businesses" lying between the Mets' baseball stadium (now-gone old Shea Stadium and now-functioning Citi Field) and now-booming Flushing, a sort of wasteland "that has twice beaten back attempts at redevelopment." Once again the developers have their beady eyes on an imagined wonderland. "We’ll walk to the area from central Flushing," Jack says, "to understand its important setting, confront ecological issues and learn why 'Willets Point'  is a misnomer."

The September-November MAS schedule won't be announced till, probably, mid-August, but Jack has tipped his mailing list off that he has some tours coming up: Forest Hills to Corona (Saturday, 9/7, 4pm), Maps, Realities and the People's Palace (from the exterior of Grand Central Terminal to the interior of the New York Public Library, specifically the Map Division; Saturday, 9/14, 11am), Flushing's Koreatown (Saturday, 10/19, 11am), and Astoria (Saturday, 11/23, 11am).

But the really exciting development I referred to earlier is an addition to Jack's famous all-day expeditions built around a subway line. He has been doing The World of the #7 Train annually for a number of years now, and not that long ago revived his Day on the J. Now he's taking on Brooklyn's Brighton Line (Howie's and my old subway connection to "The City" in our Brooklyn years).

This is a series of five walks and connecting rides along what was once the Brooklyn, Flatbush and Coney Island RR dating to 1878. Walks take place in Prospect Park, Brighton Beach, along Avenue U, in Ditmas Park and Central Flatbush. Lunch is in Brighton Beach where you can picnic on the Boardwalk. Tour fee is $39 and you need to preregister by check to Jack Eichenbaum, 36-20 Bowne St. #6C, Flushing, NY 11354 (include name, phone and email address). Get the full day’s program and other info by email jaconet@aol.com. The tour is limited to 25 people. Don’t get left out!

Those who didn't know about Brighton Line Memoirs -- meandering off the Q train or weren't able to register when Jack originally intended to offer it, on July 21, are benefiting from a blow of misfortune he suffered this summer: a knee injury that didn't ground him but made it medically inadvisable for him to be on his feet so long. So he has rescheduled this exciting outing for the end of September when, as he notes, it will also be cooler.

I had my check in the mail the day the tour was originally announced, but the delay also helps me. I'm hoping that by the new date my leg will be a good bit stronger. (I also would have had walking tours on back-to-back days, something I've found I don't do so well yet.)


OH YES, THE TRANSIT MUSEUM STILL HAS
ONE MORE NOSTALGIA RIDE THIS SUMMER

I've also had a busy summer with NYTM, including a vintage subway-and-bus trip to the Bronx's Orchard Beach (on a day that turned out to be singularly un-beach-friendly). The third of the summer's three popular Nostalgia Rides is still coming up.

Venture uptown on our WWI-era IRT subway cars to spacious public grounds at Van Cortlandt Park, the third largest park in NYC. During a 3-hour layover, explore Van Cortlandt House Museum and a stroll along the John Kieran Nature Trail. Pack a picnic blanket and “staycation” with us!


Information on Municipal Art Society walking tours is ridiculously easy to find. Just go to mas.org and click on "Tours." Preregistration is required, but you can probably do it online right up to tour time. For New York Transit Museum tour information, go to the Programs and Excursions page of the website. For information about Jack Eichenbaum's activities, and to sign up for his e-mail list, visit his website, "The Geography of New York City with Jack Eichenbaum."

very well written! Thanx for such an interesting post