Urban Gadabout: It's Jane's Walk weekend -- be sure to check to see what's happening in your area` 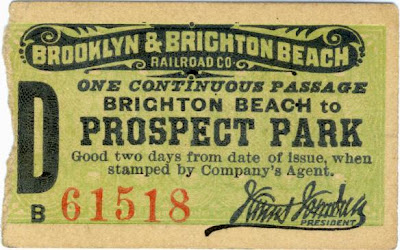 The NYC subways' Brighton Line had its origins in the Brooklyn & Brighton Beach Railroad, one of the railroads that connected to Brooklyn's ocean beaches. The big news in summer gadding is that Jack Eichenbaum is devoting another of his day-long subway-line odysseys to the Brighton Line.

Okay, I've been kind of grumpy about the fact that I'll be on the shelf for one of my favorite weekends of the year: that of Jane's Walks, in honor of pioneer urbanologist Jane Jacobs, who did so much to reorient the way we think about urban life and to empower urban folk to feel that we can claim a voice in shaping the life of our cities in the direction of design and scale optimized for heightened human interaction.

Jane spent as much of her time as she could out in the field observing -- watching the way real people live actual lives, and see what sorts of design configurations produce the most diverse and enriching experiences. If you don't know her work, one word that should give you a clue is neighborhood. She was a great believer in the richness of neighborhood life, at a time when her frequent nemesis Robert "Pave It and Run a Parkway Through It" Moses was destroying every neighborhood he could get his eminent-domain-empowered mitts on.

In New York City we now have the best imaginable situation, since the Municipal Art Society took over the planning and execution of Jane's Walk offerings, which are free and mind-bogglingly rich, diverse, and generally tantalizing. With some dedicated work I can winnow the list -- numbering 100-plus this year -- down to about 30 walks over the two days which I would really, really like to do. I hadn't even planned to look at this year's list, knowing the weekend would fall less than three weeks after my knee surgery. I finally sneaked a peek, and with enough work I think I could get it down to 30 again.

As it happens, although not formally part of the Jane's Walk festivities, on Saturday there's an open house at the 225-plus-year-old Dyckman Farmhouse, now a museum, which I can reach easily via a bus that passes right in front of my building, so I'm thinking I'll give that a shot -- plus I can't help noticing that just sticking to my home bailiwick of Northern Manhattan, between Jane's Walk offerings and those of NYC Parks there are a number of other outings Saturday and Sunday.

Note that most of the MAS-organized Jane's Walks don't require preregistration. If I were zeroing in on tour possibilities, I might incline to those that seem likely to be less crowd-drawing to enjoy a more intimate walk. That said, though, the offerings are awesome. And it's all free!

As it happens, my knee is coming along well enough that I've gone ahead and signed up for two Municipal Art Society tours I've had in my sights for the following week ever since the March-April-May schedule was announced. I can get to both by bus, so I don't have to deal with subway steps yet.

On Saturday the 11th, my old pal Joe Svehlak is doing "Downtown's Lost Neighborhood," 11am-1pm, exploring "the diverse immigrant history of Manhattan's Lower West Side in conjunction with the Arab American National Museum's exhibit on 'Little Syria.' " Now "Lower West Side" isn't a geographic term you hear a lot in connection with Manhattan. The Manhattan end of the Brooklyn-Battery Tunnel -- a Robert Moses project -- wiped out the heart of the onetime neighborhood, and the various immigrant groups that once clustered there, including Joe's Czech parents, dispersed. I once almost did a version of this walk with Joe, but it was pouring that day and I didn't even have an umbrella.

Then on Sunday the 12th I'm going to try to do Laurence Frommer's "Bloomingdale Blocks" (2-4pm) -- "the quiet tre line streets from West 96th Street to West 110th Street that boast some of New York's finest remaining turn-of-the-century row-houses, apartment buildings, institutional structures and public monuments. I figure that will be easier on my legs than Eric Washington's "Uptown Trinity Church Cemetery Spring Tour,"

On Saturday the 11th baseball aficionado-historian Peter Laskowich is leading a tour called "Brooklyn and Jackie Robinson," 1-3pm. And the following weekend, if I felt more secure about those subway stairs, I might venture to Brooklyn for Matt Postal's "New to New York: Downtown Brooklyn," Saturday the 18th, 11am-1pm, and for Suzanne Spellen and Morgan Munsey's "Brooklyn's Automobile Row" (Bedford Avenue between Fulton Street and Empire Boulevard in Crown Heights), Sunday the 19th, 11am-1pm. It's looking as if my first subway venture may be for the rescheduled version of Snyder Schools scholar Jean Arrington's "Brownsville's Cache of C.B.J. Snyder Schools," Saturday the 25th, 11am-1pm.

Meanwhile, New York Transit Museum members have been early-registering for the newly announced summer schedule since Tuesday, with registration for nonmembers scheduled to begin this Saturday the 4th. Among the tours I signed up for is one I've been awaiting eagerly for months: a visit to the (now finally reopened) totally rebuilt Smith-9th Streets elevated subway station perched on the viaduct over Brooklyn's Gowanus Canal along with the neighboring 4th Avenue-9th Street station. There are more Grand Central Terminal-themed tours, food tours, visits to the 240th Street Maintenance Facility, and more, including the summer's three "Nostalgia Rides," to Coney Island (June 29), the Bronx's Orchard Beach (another Robert Moses legacy, July 13), and the Bronx's Van Cortlandt Park (August 25).

First off, Jack is doing a Jane's Walk this Sunday the 5th, "Bowne Street, My Street," "a walk along the length of historic and multiethnic Bowne Street in Flushing where I have been living for 35 years." If I weren't mobility-impaired I would definitely do this. About a month ago Jack did a walk through the Bayside (Queens) neighborhood where he grew up that was notable both for personal and for regional history. Meet at the northwest corner of Main Street and 39th Avenue (St. George Episcopal Church), near the Main Street (Flushing) station of the no. 7 train.

Jack has a couple of walks scheduled in rapidly developing Long Island City in conjunction with the third Long Island City Arts Open (LICAO), May 15-19, and in May he'll be resuming the series of Wednesday evening walks (6-8pm) he's been doing in recent summers. Scheduled so far under the heading "Changing Cultures of Queens" are: On and Off Jamaica Avenue Avenue (May 22), Sunnyside to Jackson Heights (May 29), and Long Island City to Old Astoria (June 5).

The big news for those who have done or wish they had done Jack's daylong subway-line odysseys ("The World of the #7 Train" and "A Day on the J") is:

This is a series of five walks and connecting rides along what was once the Brooklyn, Flatbush and Coney Island RR dating to 1878. Walks take place in Prospect Park, Brighton Beach, along Avenue U, in Ditmas Park and Central Flatbush. Lunch is in Brighton Beach where you can picnic on the Boardwalk. Tour fee is $39 and you need to preregister by check to Jack Eichenbaum, 36-20 Bowne St. #6C, Flushing, NY 11354 (include name, phone and email address). Get the full day’s program and other info by email jaconet@aol.com The tour is limited to 25 people. Don’t get left out!

You better believe I've already sent my check in! (And not just because the Brighton Line was my subway lifeline to "the City" growing up in Brooklyn.)