Bombay To Beijing By Bicycle-- A Guest Post By Russell McGilton 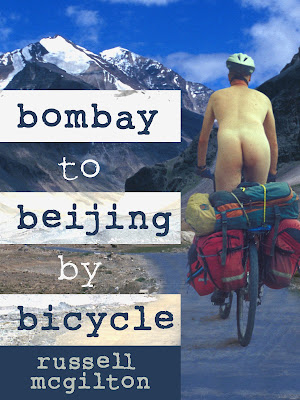 The first time I arrived in India it was 1969 and the world was changing around me and inside me. I drove in my VW van from Europe and I stayed almost 2 years, I've been back numerous times since and right now Roland and I are planning another trip to the Subcontinent. Pretty soon you'll be inundated with posts about planning and executing a trip to India, the wonders of Delhi and the glory of Kerala. Meanwhile, though, I asked author Russell McGilton to give us a guest post about his own adventures in India and his recent book, Bombay To Beijing By Bicycle

TEN THINGS ABOUT THE TRIP

There I am, two weeks into my grand adventure to cycle from Bombay to Beijing when in some backwater town in India I fall ill to a terrible fever. The doctor has a wonderful beside manner: ‘Congratulations! You are having the malaria!’

‘Riiiiight! Um, tell me doctor. Do many people die from that around here?’

Despite medical treatment, I will never be quite free of the fevers. Later in the Rajasthani Desert, the school principal of the small town of Shergarth has an enlightening solution of

•  DRINKING MY OWN URINE.

'Drinking your own urine will cure you of the malaria. '

'Yes. I am taking the piss since 1996 and I feel much better for it. I am stronger, much vigour and I have not been sick once since the treatment.’

So after much ado-ing (is that a word?) I give it a shot. And you know. Mine’s not too bad with a slice of lemon on the side. To my surprise the fevers subside unlike the

Yes, stop for a quick look at your map, adjust your shorts, a bite to eat, oil the chain and within seconds a crowd of gawking admirers is upon. Even when I am trying to quietly relieve myself behind a bush I look up to see what seems to be the entire population of Indian children staring at my spluttering confluences, smiling and calling for pens. I go insane. But this is nothing compared to

• BEING CHASED BY A RHINO.

In the Bardia National Park of Nepal, after failing to locate any tigers we are now in long grass looking for rhinos. ‘Up ahead are rhino. Grass very long. I go first,’ Mundi, our guide warns, ‘If I see rhino I will say “RUN UP TREE!” So you must RUN UP TREE! No ifs or buts.’

Of course, within minutes we hear, ‘RUN UP TREE!’ Everyone gets up their tree, everyone… except me! Because the trees are quite thin and keep breaking. Eventually, I find a tree and latch onto it just as two pale grey rhinos, some 30-metres away, charge us. They stop, look around, snort loudly before charging again and repeating the process. Later, I ask Mundi why they charged only three times.

‘I don’t know. Maybe…’ he rubs his chin thoughtfully. ‘They can’t count to four!’ The next time I am terrified out of my wits is when I get

• STUCK IN PAKISTAN DURING THE WORLD TRADE CENTRE BOMBINGS.

In Abbottabad (yes, where they killed Bin Laden!), over a hundred kilometres away from Islamabad, I’m madly cycling to the Chinese border when I hear its just been closed. What’s more anti-Western sentiment is stirring up and so, feeling ‘visible’ and I take to wearing the Pakistani national dress, the shalwa kameez (long shirt and baggy pants) and a topi (a Muslim cap). This is rendered futile when I jump on my loaded mountain bike and crowds of smiling men shout, ‘AH! AMERICAN! AMERICAN!’

Luckily, I get a bus out and make it over the border back into India then onto China where I nearly

• FALL OFF A CLIFF ON THE TIBETAN PLATEAU

in the dead of night. I miss an important stopping point (an abandoned hut to sleep in) and continue up the snow-laden pass. My wheels slip and skid through the slush and more than once I nearly lose my balance and fall into the inky abyss just to the left of me. I am saved by herb fossickers who greet me warmly into their large hut. On the road Chinese-Anglo relations are further enhanced when I hear truck drivers yell ‘I LOVE YOU’. This leaves me blushing but not as much as when I decide to

• MOON THE GREAT WALL OF CHINA.

Sans clothes I run up and down the rocky and unpredictable rocky wall when a bemused guard laughs too heartily for my liking (it was winter, you know).

When I finally arrive in Beijing, I am shocked to see that the Western Pig Dog Imperialists have made there way through the once impenetrable Forbidden City walls not with canons but with polystyrene coffee cups. Yes, there’s a

inside. I’m so disgusted I down two Brazilian Grande Lattes. As I cycle the streets of Beijing, putting the trip into perspective, I realise that what is more terrifying than the malaria I had contracted, drinking my own urine, nearly falling off cliffs or the hysteria of terrorism but that the knowledge that the environment I had just enjoyed will, in a few short years, be totally unrecognisable as freeways, cars and pollution leave their indelible footprint. Alas, my daughter shall not have such joys.

Posted by DownWithTyranny at 4:39 PM