There's More To Australia Than Sydney, or Even Melbourne... Canyoneering With Mark Jenkins 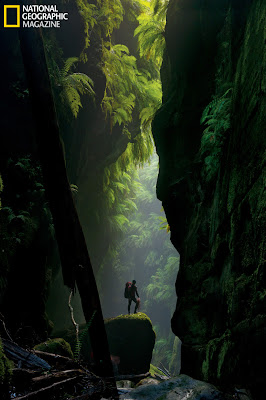 © Carsten Peter/National Geographic. Cascades of mammoth ferns flourish in the humid air trapped between the narrow walls of Claustral Canyon.
Tuesday the new issue of National Georgaphic comes out with a fascinating essay by one of my favorite adventure travel writers, Mark Jenkins. His 1997 book, To Timbuktu was one of the inspirations for my own trip there two years ago. I doubt however, I'm up to following his trail into Australia's Blue Mountains. "The Swiss," he writes, "have mountains, so they climb. Canadians have lakes, so they canoe. The Australians have canyons, so they go canyoneering, a hybrid form of madness halfway between mountaineering and caving in which you go down instead of up, often through wet tunnels and narrow passageways."

Unlike other places with slot canyons, such as Utah, Jordan, or Corsica, Australia has a rich, deep heritage of canyoneering. In a way, it's an extreme form of bushwalking, something Aborigines were doing tens of thousands of years before Europeans arrived. But without ropes and technical equipment, Aborigines couldn't explore the deepest slots.

Today perhaps thousands of Aussies hike canyons, hundreds descend into them by ropes, but only a handful explore new ones. These driven individuals tend to have a rugby player's legs, knees crosshatched with scar tissue from all the scratches, a penguin's tolerance for frigid water, a wallaby's rock-hopping agility, and a caver's mole-like willingness to crawl into damp, dark holes. They prefer to wear Volleys-- canvas, rubber-soled Dunlop tennis shoes-- ragged shorts, ripped gaiters, and thrift-store fleece. They camp beside tiny campfires and make "jaffles" for breakfast, lunch, and dinner. Jaffles are sandwiches containing all manner of ingredients-- including Vegemite, a nasty-tasting yeast extract-- cooked inside fire irons over the flames. Above all they search for the most remote, difficult to access canyons. "The darker, the narrower, the twistier the better," says Dave Noble, one of the most experienced canyoneers in the country. "People say, What if you get stuck in there? But that's what you are after. To be forced to improvise to get yourself out."

His story in National Geographic is set about 4 hours west of Sydney in Kanangra-Boyd National Park and down the Mount Thurat fire trail and then up to the top of Danae Falls. He and his companion are traveling with wet suits, helmets, a rope, harnesses, and lunch in their packs. "It's like rappelling off the edge of a green-cloaked Grand Canyon," he writes.

The walls are covered with moss. Sliding to the inside of the giant stone turns out to be like squeezing into a narrow, ten-story elevator shaft pouring with water. We're forced to swing into the pounding waterfall, an awkward maneuver that slams us both into the rock. But it's worth it: Standing in a pool at the bottom, we easily pull our rope down.

Below the big boulder the slot closes up, and the silky water flows horizontally along the cavelike chamber back out to the edge of the cliff. We still have a thousand feet of air below us. We rappel directly into the bludgeoning waterfall. Halfway down I make the mistake of looking up, and the blast of water almost tears my head off.

The next three descents are just as extraordinary and drop us into hanging ponds of frigid water, like swimming pools midway up a skyscraper. We backstroke across these ponds, using the dry bags in our backpacks for flotation.

I like adventure travel-- a lot; this however is beyond my capacities these days. I'll stick with the thrill of reading about it in National Geographic... and hoping they filmed it and it winds up on TV. Canyoneering is popular in Tasmania too. Looks easy, doesn't it?