How Long Will It Take Arizona's Tourist Industry To Recover From The Republican Party Jihad Against Hispanics?

The U.S. has virtually no chance to bring home its bid to host the 2018 World Cup, officially submitted today, because of the anti-Hispanic police state created in Arizona by that state's off-the-rails Republican Party. And two major Mexican soccer teams, Club América and Club de Fútbol Pachuca, cancelled their July 7th match at University of Phoenix Stadium. That's because Arizona Republicans have been doubling down on their sociopathic jihad against Hispanic residents. As Austin joined San Francisco and Los Angeles in announcing a boycott of Arizona's new anti-Hispanic police state, tourist officials there are bracing for the worst. In Phoenix alone, David Krietor, a deputy city manager who is tracking the issue, said this week the city faces lost business worth about $90 million over the next five years. Debbie Johnson, president of the Arizona Hotel and Lodging Association, said a boycott might be disastrous for the state's more than 200,000 hospitality-industry workers. "We really don't need another hit," she added. As of April 30, the lodging association had identified 19 conventions canceled, worth an estimated 15,000 room nights, or $6 million. This is getting more and more serious and it's time to really wake up here. Yesterday when I was reading Sebastian Doggart's wonderful post on unindicted war criminal Condoleeza Rice and his reference to Martin Niemöller's chilling 1940s-era poem, I couldn't help thinking about what the Republicans are doing to the state of Arizona. Original translation:

When the Nazis came for the communists,
I remained silent;
I was not a communist.

When they came for the Jews,
I remained silent;
I wasn't a Jew.

When they came for me,
there was no one left to speak out.

Arizona is getting out of hand. And it isn't about controlling the borders or controlling crime. It's pure fucking racism and narrow-minded, self-righteous bigotry. The accidental governor signed another hate-filled bill to tell Hispanics they're not welcome in Arizona, another piece of the Republican ethnic cleansing push. Latest to be banned: "ethnic studies."

HB 2281 bans schools from teaching classes that are designed for students of a particular ethnic group, promote resentment or advocate ethnic solidarity over treating pupils as individuals. The bill also bans classes that promote the overthrow of the U.S. government.

The bill was written to target the Chicano, or Mexican American, studies program in the Tucson school system, said state Supt. of Public Instruction Tom Horne.

School districts that don't comply with the new law could have as much as 10% of their state funds withheld each month. Districts have the right to appeal the mandate, which goes into effect Dec. 31. 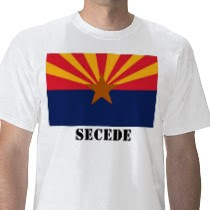 She has no intention of ending the program, which offers courses from elementary school through high school in topics such as literature, history and social justice, with an emphasis on Latino authors and history. About 3% of the district's 55,000 students are enrolled in such classes... Ethnic studies are taught at high schools and colleges nationwide, but the Tucson district officials say their 14-year-old program is unique because it's districtwide, offered to grades K-12, and can satisfy high school graduation requirements.

Yesterday the Los Angeles City Council, in a 13-1 vote (lunatic fringe nutcase Greig Smith from Simi Valley being the "1"), decided to ban travel and future contracts with Arizona over their anti-Hispanic policies.

During a morning-long debate on the resolution, council members compared Arizona’s action to Nazi Germany and the beginning of the Holocaust, as well as the internment and deportation of Japanese Americans during World War II. A new Arizona law, which will take effect July 23, will require police to determine whether people they stop are in the country illegally, which critics say will lead to racial profiling.

“Los Angeles the second-largest city in this country, an immigrant city, an international city. It needs to have its voice heard,’’ said Councilman Ed Reyes, one of the resolution’s sponsors. “As an American, I cannot go to Arizona today without a passport. If I come across an officer who’s having a bad day and feels that the picture on my ID is not me, I can be … deported, no questions asked. That is not American.’’

Even national Republicans (though not McCain) are embarrassed by the out and out racism-- they usually prefer it carefully cover-up-- and yesterday it was announced that the heavy favorite for the 2012 GOP Convention, Phoenix (who "had it in the bag") was suddenly replaced with Tampa, a very open and multi-ethnic, all-American city. As disappointed as they are, beleaguered Arizona tourism officials aren't even a little surprised. Tourism, one of the state's most important industries-- first because of the violence and now because of the racism, is in the crapper.

Hispanic civil rights groups are boycotting Arizona and urging others to do the same. Officials at the National Council of La Raza, one of the groups driving the boycott, had privately asked the RNC not to meet in Phoenix.

The city risks losing as much as $90 million in hotel and convention business over the next five years because of the controversy, according to city estimates released Wednesday. The state's hotel and lodging association has counted 23 canceled meetings for a loss of between $6 and $10 million. On Wednesday, Los Angeles became the largest city to join the boycott.

...Arizona Republicans, including Gov. Jan Brewer, have stood more solidly behind their immigration law as a necessary tool for dealing with illegal immigration. She has also pushed back against the boycott, particularly the call for Major League Baseball to pull the 2011 All-Star game out of the state.

MLB owners, who have not commented on the boycott, begin a two-day quarterly meeting in New York this week. No major action items are on the agenda, but advocates of the boycott hope it will be discussed.

"You have a sport that the Latino community loves, whether you are a recent immigrant or native born, Latinos see baseball at their sport," said Clarissa Martinez De Castro, the director of immigration and national campaigns at NCLR. "The question is: As a sport where do they stand?"

The MLB Players Association has come out in opposition to the law, as have the Phoenix Suns. The team wore its "Los Suns" jerseys last week specifically to push back against the state's law. The decision came from team owner Robert Sarver, who suggested the players wear their Noche Latina alternates.

Concert promoters are also starting to feel their business disintegrate, Cypress Hill being the latest band to cancel a show and announce support for a boycott of Arizona. There's no chance I will go to Arizona while these Republicans are doing this kind of thing. Blue America is also urging everyone to support the only federal elected official in the state who is standing with the Hispanic community, Rep. Raúl Grijalva (D-AZ) at the One America page. Grijalva and his staff have been threatened-- with serious violence (one gunman has been arrested so far)-- and he has had to close down his constituent services offices in Tucson and Yuma. Arizona isn't behaving like its part of America. I bet we couldn't get the Mexicans to take it back though.

Meanwhile Faith in Public Life announced today that an “emergency delegation” of Bishops and prominent religious leaders from Arizona will fly to Washington tomorrow to ask Sen. John McCain and White House officials to set politics aside and take immediate action on comprehensive immigration reform.

These religious leaders-- who will also meet tomorrow with DOJ, DHS and other Members of Congress from Arizona-- are on the front lines of the immigration debate, as their state enacts Arizona SB-1070-- an extreme measure that will likely lead to increased discrimination and racial profiling, and penalizes families and faith communities already living in fear. This draconian legislation, which has been denounced by religious leaders from across the theological, political and ideological spectrum, demonstrates the urgent need for political leadership from Arizona’s Senators and the President to move on comprehensive immigration reform immediately-- before other states follow in Arizona’s footsteps.

Posted by DownWithTyranny at 5:21 PM

Email ThisBlogThis!Share to TwitterShare to FacebookShare to Pinterest
Labels: Arizona

The tourists officials at Arizona are indeed heading for the worst..The grave scenario must be bought under immediate control before it gets out of hand and more Hispanics should not be targetted in the name of racism..