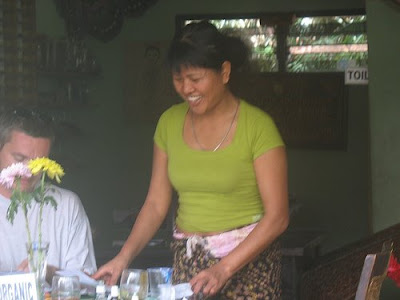 Right now there's virtually nothing that attracts me to leaving the grounds of the villa I rented on the outskirts of Ubud in central Bali. The villa itself is gorgeous-- far more beautiful than the website-- but the grounds... it's like being in the Garden of Eden, tropical flowers everywhere, orchid petals blowing by when there's a breeze, birds singing, the most fabulous outdoory showers ever, a beautiful swimming pool, plenty of privacy... and WiFi. And two wonderful cooks who have been preparing raw vegan food. Soon enough Roland and Helen and Michael will be here and we'll be running all over the island with Anwar, our trusty guide and driver, seeing temples and the volcano and herb plantations and beaches and little villages without roads. But now I have the place to myself and I don't want to move.

But I did. The grandmother of one of the cooks died and the cremation ceremonies take about a week culminating in a huge to-do on Saturday (to which she invited me). Meanwhile, I'm on my own for dinners. The good news is that just down the road a bit is Bali Buddah, the legendary organic restaurant that serves raw food. In fact, there are at least 2 raw food restaurants near the villa-- that's more than near more house in L.A.! So I ate at Belly Buddah a few times and loved it and across the road I saw what I casually took to be a healthful massage place run by a woman named Wayan Nuriasih. At Belly Buddah the other night they were playing the beautiful chants of any old college friend, Jeff Kagel, better known to the world as Krishna Das and it made me feel so high that I popped into Wayan's and asked for a massage. She told me to come back the next day at 1pm.

Well, it was healthful and it there was a massage involved but it turned out that Wayan is one of the most famous healers of Bali. I arrived at 1pm and left just after 5. I feel terrific and she threw in some stuff to make my hair grow back and something good for mosquito bites! While I was having my totally delicious multi-vitamin lunch, a senior from Brigham Young walked in with her grandmother and cousin. They mentioned that Wayan is one of the stars of Elizabeth Gilbert's book, Eat, Pray, Love. Never heard of it. So they started telling me about it and then I remembered-- my friend Cynthia was raving about how great it was a few months ago.

Anyway, it was definitely more than a massage. I had a full blown diagnostic session, spiritual and physical, tons of potions and herbs and oils and then hours of massage which often entailed 6 hands working me over at once. Look, if you come to Bali you'll certainly be able to find a less expensive massage, but you'll never find something as good or as unique. Highly recommended!-- and explained at the BaliSpirit website.


UPDATE: Another Day, Another Massage

Don't get the idea that I'm not doing anything in Bali but getting massages. I also swim, relax and blog. But I did hear about an incredible masseur from an American masseur who swore by this guy. So after a refreshing swim I ambled over to the Nur Salon on Hanoman about 15 minutes from where I'm staying and asked for Young Made (pronounced Madi). If the massage at Wayan's was an integral part of a spiritual healing session, this was pure physical. And one of the best massages of my life. An hour was $10 and I'm going back everyday.
Posted by DownWithTyranny at 2:59 AM

I cannot express to you the depths of my jealousy.

Oh Howie, that sounds wonderful. I checked out the place (villa) online when you gave me the head's up you were headed to Bali- it looked like paradise! The pool, the waterfalls, etc. etc. You deserve it!

Spas are not only popular for travelers who are looking for a moment of pampering, but many treatments have been used by the Balinese for many generations as well.Visit www.bali-deals.comfor more information.