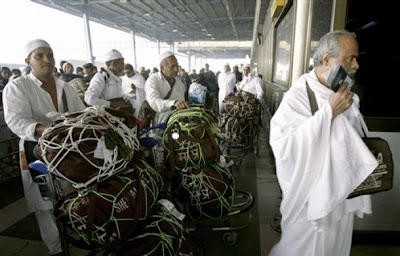 Flying out of Delhi's international terminal is, to put it mildly, stressful-- even more stressful than air travel has become in general-- and chaotic. Not only is it the most aggressively anarchistic place I've ever been in, at least 75% of the passengers look like they could be featured in a Watch For Terrorists ad-- if not an al-Qaeda recruitment poster. An American profiler would short circuit.

There may be, on an office flow chart in someone's desk somewhere, a schematic for how it's all supposed to work... but I doubt it. At every step along the way, among the pushing, shoving crowds-- many of whom seem to have never been confronted with the concept of "a line" before-- there is something designed specifically to hold up the process and make you return to Go. If you ever thought getting to the airport two hours before your departure was too big a waste of time, let me assure that they must have had Delhi in mind when they made that rule of thumb... and they were being optimistic.

The first nightmare involves getting the bags you intend to check into a great big cavernous black box and collecting it on the other side. Somewhere along the arduous quest for departure someone is bound to tell you about this-- usually the man at the end of the 30 minute line in front of the check-in counter. Black box first, check in after. But once you get through the crowds to the black box and figure out vaguely what's supposed to happen and how, you need to confront several hundred Osama bin-Laden look-alikes jostling in front of and all around it. I thought I was at the Kaaba. Nothing really seems to happen-- just a tremendous amount of seemingly unfocused kinetic energy but no discernable movement towards any goal. I knew I'd be OK eventually but I couldn't help wondering if the fragile looking elderly ladies lurking apprehensively on the outskirts of the melee would wind up stuck at the airport forever.

Eventually you find someone with an airport smock, slip him 10 rupees (like a quarter) and he shoves your bag into the box, gets a security string tied around it and you're good to go-- back to the boarding pass counter line. It was worth the 10 rupees because he alerted me about the need for a security stamp or some kind before you can get your boarding pass that allows you to proceed to the security check. I'm sure regular Delhi Airport commuters are well aware of this quirk.

Once you pass through security, it's less chaotic-- but just a little less. There are families (or tribal groups) camped out on the floors, apparently not having chairs as part of their culture. (Later, on the Air India jet, I realized some of my fellow passengers were among the 700,000,000 Indians I wrote about at DownWithTyranny a few days ago who have no access to sanitary facilities. Besides explaining seat belts and oxygen masks, the flight video does a tutorial about how to use a toilet.) But first I had to find a gate for my flight. There were just 3 question marks where a gate number should have been on my boarding pass and the loudspeaker announcements were so garbled and so unintelligible that it was impossible to tell if they were in Hindi, English or something else. Eventually some airport employee started walking around the terminal shouting "Bangkok flight, Gate 11." That worked. I won't have to brave this nightmare again for another month. And in a couple of years this will place will be left to domestic passengers since India is building a new international airport on the other side of Delhi. I only hope it is as well-planned as the brand new Bangkok international airport.
Posted by DownWithTyranny at 4:57 AM

I found your blog recently, Howie.
Enjoyed reading it very much.

We think alike in many ways.
Hope you're well and happy!

This is absurd! I'm not Indian and now I'm visiting India for the first time so I have also recently experienced the Delhi airport. Surely, it was not very modern or well planned out - but Osama look alikes?!?! Is this how you identify danger by ruling out a whole race of people? In fact, you can't even tell apart Indians and Arabs!?! You must be a very narrow minded person. Also, sitting on the floor is not any more or less civilized than sitting on chairs. It's a cultural convention.

osama bin laden look alikes?? where are you from...the land of blind people? can u even make out the difference between monkeys and humans...? do you walk into a different house everyday thinking its yours...grow up!!

i am also aggree in this news.i was also suffered from such behaviours from the indian officils.
http://thehelsinki.blogspot.com/

I recently had transit to Delhi on my journey from Heathrow to Kathmandu,I lost my baggage and had to wait 9 hours in the bench,officials so unhelpful,charge me 3 minutes when I call a minutes,probably the worst experience I had in my life.It really sucks and tense my 9 hours waiting.Indian and officials please do something to upgrade and show your good behavior if you want to compete globally.

As someone who has gone to the Delhi airport several times, I wholeheartedly agree that it is stressful, chaotic, and an experience that leaves my head pounding.

But, unlike you, my headache does not come from my desire to discriminate against a race that was in no way affiliated with terrorist attacks on US soil.

See, I think you sound kind of like an ignorant jackass, but that, my friend, has nothing to do with race and everything to do with your writing. Because, you know, I'm not a racist.

Hey.. I came across your blog searching "how safe is Delhi airport". Any safety concerns?