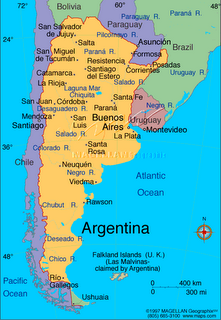 It's 5:17 AM and my plane takes off just after noon for Buenos Aires (via Dallas). I decided to go to the end of the world (Tierra del Fuego, that island off the tip of South America). I'm half packed and pretty much ready to go. I'll be writing about Argentina, Uruguay, Paraguay, Brazil-- well, about the Iguazu Falls part of Brazil I'll be visiting for a couple days-- and in I figure out how to get into Chilean Patagonia, there too. But I figured I'd get some preliminaries over with even before leaving.

I'm flying on American. Needless to say, even with my 100% flexible schedule, there was no possibility of trading advantage miles for a ticket (single person/first class). So I bought a ticket and upgraded. You probably know the way that works: the less expensive tickets are not upgradable so you have to buy a pretty expensive ticket and then you have to spend another $500 for the honor of using your miles. I had never heard of that before but the AA operator assured me it had been standard practice "for years." And there were other little charges. Still, after checking everywhere and wasting lots of time talking to other airlines, it still looked like the best deal.

Did you know there isn't a single English language tourist guide to Paraguay? [UPDATE: I found one

after all!] There used to be one that covered Argentina, Uruguay and Paraguay but it's out of print. But what really shocked me is that several guide books on South America don't even mention Paraguay. They have chapters on every other country, even Ecuador and Guyana, but no Paraguay. When I finally located one that did include Paraguay-- in a travel bookstore-- I also found out that I needed a visa in advance. But then luck broke my way. There's a Paraguayan consulate in L.A. and, it turned out, the visa process was as non-onerous as could be. You just fill out some simple papers, hand over 2 photos and some money and off you go. The consul also told me Brazil requires a visa for Americans, who they don't like, and it takes 2 weeks. Panic.

I drove right to the Brazilian consulate. Onerous was the keyword and he was right about them being decidedly anti-American (or at least anti-American tourist). I arrived at 1:15. They stop answering questions at 1. No exceptions. Come back tomorrow. It didn't matter that I was leaving in a week and that they would be closed for Thanksgiving and that I live an hour away. And that I was there. No exceptions. There are only two hotels inside the Iguazu parks, one in Argentina (sold out) and one, a much better one from what I've read, in Brazil. I'm booked in the Brazilian one. What to do, what to do.

OK, I'm off to finish packing and to eat breakfast and to go for a dawn swim before heading off to the airport, Dallas and Buenos Aires (where I should arrive at 9AM tomorrow morning).

I always marvel at the ability of my friend Jane to blog and chew gum at the same time-- and to do it so elegantly. She travels everywhere all the time and blogs up a storm and runs firedoglake, one of the most admired and smoothly-functioning community blogs in the entire world. She keeps trying to get me to do learn to blog on the go. She did teach me html so I guess she could teach me bloggin' on the road too. I suspect I'll screw it up. I mean it's hard to even conceive of blogging without my ergonomic chair and wrist-rest and all my physical backup and research apparatus. And my Macs.

But here I am, in the Admiral's Club in the Dallas-Ft. Worth Airport. It was a nicely uneventful flight, short and uncrowded. And here in the lounge: free computer usage. Ah... at least they give you something for stealing the $500 just to use "your" miles! They just called the flight. I just blogged on the road. Jane will be proud.
Posted by DownWithTyranny at 5:49 AM

Your travel stories are wonderful. I am looking forward to reading more.