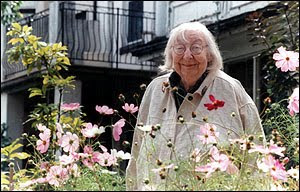 "The ballet of the good city sidewalk never repeats itself from place to place, and in any one place is always replete with new improvisations."
-- Jane Jacobs, in The Death and Life of Great American
Cities, the epigraph on the 2011 Jane's Walk USA website
by Ken

Really, I'd be curious to know what people did and saw around the country in this weekend of free walks (yes, free! celebrating and keeping alive the memory of that pioneer of modern urban life Jane Jacobs (1916-2006), author most famously of The Death and LIfe of American Cities, timed to her birthday (which was Wednesday).

On the actual birthday, the Municipal Arts Society has an annual tour, "Her Village," in which architectural historian Matt Postal leads participants through sites associated with Jane's life and causes in the neighborhood, and winding up in front of the modest little three-story house on Hudson Street (down the block from the White Horse Tavern) which she and her husband bought and in which they raised their two sons and a daughter until pulling up stakes for Toronto in 1968, unwilling to allow the coming-of-age Jacobs boys to be subject to the draft for the Vietnam War, which they vehemently opposed.

I think my very first MAS tour was one of Matt's, which remains one of my all-time favorites from a "concept" standpoint: a walkthrough of a project that never got built, thanks in part to the activism of Jane Jacobs. It was the legendary Robert Moses's first major defeats, planned as another of his slash-and-destroy neighborhood-killers, the Lower Manhattan Expressway, which would have provided a direct vehicular link between the Holland Tunnel on the west and the East River bridges to Brooklyn on the east, at the cost of a neighborhood filled with the kind of people that neither Moses nor the business community that supported him cared about.

Every time Moses was pushed back, he came back with an altered version of the plans, until finally community groups discovered -- with Jane Jacobs playing a major role -- that they really could fight City Hall. (Moses wore so many public hats that fighting him was in effect fighting a united wall of bureaucracies.) The strategic breakthroughs involved in the LME fight(s) involved organizing community resistance and finding ways, normally through the standard media, to make a "story" of that opposition.

It was a stark reminder of the gulf between Robert Moses's way of looking at cities and Jane Jacobs's. If you look at Moses's plans for the city of the future, you see high-rise building containing hermetically sealed dwellings that the dwellers left only to go to their cars to drive on Moses's highways to . . . well, destinations, including Moses's parks and other recreation facilities. Left out was any kind of human interaction, any kind of community -- the very thing that counted for so much in Jacobs's thinking, that and the idea that people living and working in neighborhoods are entitled to a say about the use made of their neighborhoods.

Jacobs famously loved low-rise buildings with stoops, which encouraged neighborhood interaction, and buildings with stairs rather than elevators. She was an obsessive observer, getting out "in the field," seeing what made neighborhoods work, what made them active and vital, and what made them work less well. She was correspondingly distrustful of top-down planning by people who didn't know, or often didn't care, how people actually live their lives.

My only regret about the Jane's Walk weekend was how many interesting-looking tours were scheduled in New York which I wasn't able to go on. I was out of commission Saturday because I wasn't going to be deterred from another Queens tour led by Jack Eichenbaum, with whom I've done both New York Transit Museum and Municipal Art Society tours and last week his own spectacular all-day "World of the #7 Train" tour (for which in the end he had to turn away eight would-be registrants). I didn't imagine I'd have another opportunity to walk "The Right-of-Way of the Flushing Central Rail Road" (under the auspices of the Queens Historical Society), which for some seven years in the 1870s connected Flushing to Hempstead, Long Island, and "lives on in a swath of parkland and streets," of which we walked the portion from Flushing to Fresh Meadows.

BY THE WAY, JACK EICHENBAUM HAS A WHOLE
SERIES OF QUEENS TOURS COMING UP

One of the things that makes Jack, as an "urban geographer," such an interesting tour leader (he's the current Queens borough historian, by the way) is his fascination with how and why areas and neighborhoods have developed and continue to develop, and one of his current fascinations is the incredibly rapid evolution of Long Island City in the wake of a major zoning overhauls by the city. He has five tours of the area coming up next weekend ("Daylight Loft Buildings in Long Island City," Saturday, May 14, and "Long Island City Shoreline to the Noguchi Museum," Sunday, May 15), the following Wednesday evening (" Queensboro Plaza to the Waterfront at Sunset," May 18), and the following weekend ("Long Island City Studio Strolls," Saturday and Sunday, May 21 and 22). The sunset walk to the waterfront is also part of an extensive series of Wednesday-evening tours Jack is doing from May through July under the heading "Changing Cultures of Queens: A Walking Anthology," including "Flushing's Chinatown" (this Wednesday, May 11) and "Sunnyside to Jackson Heights" (May 25).

They're all $15, and no advance reservations are required. For more information, check Jack's website.

THE JANE'S WALK I FINALLY CHOSE FOR TODAY

In addition to the Saturday Jane's Walks I couldn't take, but tried to keep track of in case maybe someday I can try to do them on my own, there were a number on Sunday I might have done, but in the end I opted for "The Draw of a Vibrant Waterfront," a tour organized by two New York Harbor-obsessed bloggers, Will Van Dorp (of Tugster, recently profiled in nytimes.com's City Room), an English professor by day who thinks of the vast working New York Harbor as the city's "sixth borough"; and Christina Sun (of Bowsprite), an artist whose passion is directed toward the people who work the harbor -- people who mostly from someplace else. On a picture-perfect day, with just enough clouds to add drama to the blue sky, our small but hardy band took the noon Staten Island Ferry (it was a difficult decision, knowing how unpunctual people are these days, to depart on time rather than wait the half-hour till the next ferry), then headed west from the St. George ferry terminal along the north shore of Staten Island, with spectacular views of the Upper Bay from the Kill van Kull (which separates Staten Island from New Jersey) on the west to the distant Brooklyn shore on the east.

As excited as I was by my recent Municipal Art Society outing to Staten Island's Snug Harbor Cultural Center, farther around the bend on the Kill van Kull, I had one regret: that of necessity, by taking the short bus ride from the ferry, we zoomed past that magnificent shoreline. So I couldn't resist returning in the company of people who could help point me at and explain what there was to see from that wonderful vantage point, and Will and Christina (and their tugboat-savvy friend Burke) were splendid guides, and our small group included terrifically interesting people. I had a grand time.

Thanks to Will and Christine. And thanks of course to Jane.
#
Posted by DownWithTyranny at 9:00 AM