What To Wear When Traveling 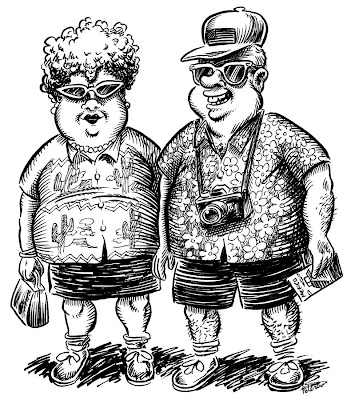 For me it's always about comfort and function. I prepared for my trip to Morocco this month but going to a K Mart and buying two new pairs of jeans, one blue and one black. I also went to a Nordstrom's outlet and bought some new underwear. But the most valuable article of clothing I have with me are some no-itch merino wool SmartWool hiking socks from REI. I originally bought them for hiking in Mali but they're doing me a ton of good here in Marrakesh since I walk for 5-6 hours a day and I'm the only one not getting blisters. Why? "Merino wool's natural moisture-wicking ability keeps feet dry and comfortable on the trail no matter what the temperature." They cost me just under $20 a pair, less than the jeans. But worth it. Meanwhile, though Condé Nast Traveller has a different approach for packing for a trip abroad. Last year they published Etiquette 101: Dress Codes. (They also published an around the world tipping guide. Here in Morocco they suggest 10% but suggest that "tipping is best done quietly, perhaps off to the side"... the furtive handshake-with-cash-in-palm move, accompanied by a smile and a thank-you.")

Back to dressing. Yesterday we visited the Mamounia, Africa's grandest hotel. I used to stay there when I came to Morocco but that was before the riad craze kicked in... and the last time we stayed, someone on the staff had stolen all Roland's cash out of a sports jacket hanging in the wardrobe the first night we arrived. And they force you to wear a coat and tie to dinner. There are other uptight, pretentious places like that around the world, though not many. The kind of people who like them deserve each other.

Etiquette 101 is very worried about how Americans represent. They are so anti-fanny pack!

What makes an Ugly American ugly? Is it the timbre of our voices? Or the way we travel in herds? Or is it (as we suspect) our love of sweatpants, baseball caps, and yes, fanny packs, no matter the occasion or place? While it can sometimes seem that the world has fallen victim to a sort of sartorial globalization, where jeans are welcome anytime, anywhere, the truth is-of course-more nuanced. What works in surprisingly laid-back Singapore will be greeted with looks of horror on the streets (or in the boardrooms) of Paris. And ladies, while you can (and should) pile on the gold and jewels in Greece, quirky and stripped-down is the way to go in Germany.

They then proceed to offer "the rules on looking not just appropriate but actually stylish around the globe, whether you're in a meeting, at a party, or just walking outdoors." Business meeting in Dubai? "Women's pantsuits should be sheeny and glam; men's duds are buffed, black, and paired with slim ties." But in the malls-- women should carry the latest Louis Vuittons and, the ward off the icy A/C a pashmina shawl, while de rigeur for men are reflective aviators and Gucci sandals. Going to a party? They suggest "glam to the gills. No Swarovski is too shiny and no Giuseppe Zanotti is too high. Men wear Y3 trainers and tailored blazers over graphic tees" And clean socks (since you leave your shoes at the door.

So much for Dubai, which I've made a point of avoiding and to which there's no reason to go unless you plan to prostitute yourself to oil-rich Arabs. Here in Morocco, visitors dress like they're in Europe but Condé Nast Traveller has other suggestions. Business meeting are formal-- suit and tie. But on the streets "you see styles of the twelfth century and modern urban wear... Moroccans are particularly averse to shorts and everything Lycra (which, in our opinion, should be universally shunned)."

They suggest that in the Far East you "need a myriad of outfit options for a transcontinental Asian trek. Miniskirts and monochrome black are safe bets from Jakarta to Japan, but women in India and Pakistan cover their legs and sport vibrant, rich hues. In fact, very few styles would work in every country: Flip-flops, for instance, are trendy in Singapore, verboten in China, and, in Indonesia, acceptable only for shower wear."

And in Europe? There's one hard and fast sartorial rule: "Shabby is never chic. And no one, whether in London or Leipzig, likes the American travel-comfort gear of clunky sneakers and shapeless skirts. That having been said, style varies wildly from country to country. The mullets that will make you a star in Moscow won't fly in peg-leg-trousers-crazed London or sleek Paris. So how should you dress? Just stay simple, look to the locals, and follow a few basic rules." Meeting in Paris? "Dark, tailored, unflashy suits by Dior Homme or Jil Sander for both women and men (who need not wear ties)." But avoid bright colors in the street and "shun the plethora of other offenses: pleated chinos, walking shorts, sport sandals, baseball caps, golf attire, loud logos, sneakers, T-shirts, and sexy clothes." And my favorite hotel in Paris, the Plaza Athenée offers this: one's shoes and belt should always match but "a man's tie should never mirror his silk pocket square." In Germany "anything shabby will be noticed; people will cluck at a scuffed shoe and gape unrestrainedly at a hanging hem or soiled shirt."

Ready for your trip? Still not! They offer a tale of two cities-- Paris and Milan, the two fashion capitals of the world, respectively the homes of Chanel and Dior on the one hand and Prada and Armani on the other.

Hair should be up.

"The Milanese girl wears whatever's on trend in a sexy, overt way. She doesn't do anything vintage or sporty."

Must be a colorful print.

"The overall effect is resilient and formal. She's not one to mess around."

"Milanese girls' style is set: all Italian, all big brands, all off the runway. She loves D&G. Prada's too intellectual, Marni's too quirky."

Skin should be tanned.

"Shoes must be high to show off her legs."

Hair must be mussed.

"Unlike the Milanese girl, she's not brand obsessed: The Parisian will mix vintage with French brands like Isabel Marant and Vanessa Bruno, and throw in some cheap stuff from A.P.C."

"There's a come-hither kind of sexiness to a Parisian girl: She's covered up but seems somehow barer, more fragile. She's more precious than your Milanese young thing: The Parisian girl is like a gift, with a sultry quality that's underlying but never plain."
These are her boyfriend's.

Her shoes are Balmain.

Of course, if you're self-confident and sensible, you know exactly what to wear that will make you look the way you want to look and, more important, be nice and comfortable without offending anyone around you.
Posted by DownWithTyranny at 9:00 AM

WOW! This was such an amazing read! You are so lucky to have the opportunities to travel to such amazing destinations! And your writing is so good, I feel like I was right there with you! :) Petter Joe